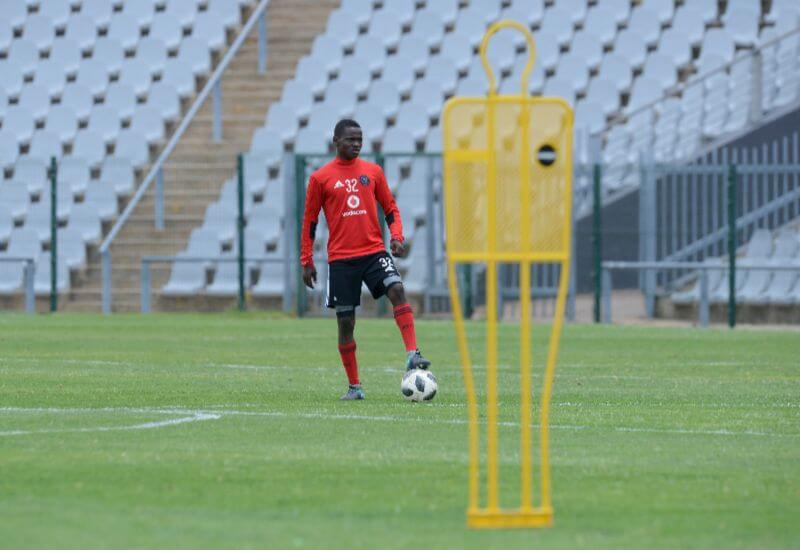 The demands on an Orlando Pirates player are massive. Outside of their obligation to the Club, they also have a huge responsibility to the fans and the football fraternity as a whole. In a sports obsessed country like South Africa, where the majority of the population support football, the ‘Happiness Index’ of every weekend is directly proportional to the results that are delivered on the field and the bigger the club, the bigger the expectation.

Siphumelele Mbulu faces a similar expectation now that he has been promoted to the senior team, and he is under no illusions as to the change in mindset that needs to be applied to get him to the next level of his game.

We caught up with Mbulu after training this morning to get a glimpse of life as a Bucs Academy graduate, now cutting his teeth with the big boys.

When the big news came

“Footballers spend their time on the field, whether training or matches or even meetings. Everything we do is at the training ground. So when you get a call to the office, you start to think of many different things. I didn’t know what to expect. I then went into the Chairman’s office and after he told me what was happening – the promotion – I called my sister to let her know. We spoke for a long time, she was mostly crying, but also very happy for me.”

“My mom was also very happy because her prayers were answered. She always believed that this day would come. The next few days after that announcement, I started getting calls from the rest of my family who were wishing me well. I come from a very rural area so the message was probably getting up and down to the rest of my family and they were calling me as they heard the news. I’m very happy for them as well.”

The transition from Junior to Senior

“It has been good so far. Fortunately, before my formal promotion I was already training with the seniors so I was starting to get used to it. I must admit, when I got the call to join them the first time I was terrified! They have an aura about them.”

“Happy Jele was one of the first players to give me advice when I arrived and he still talks me through various aspects of my game. He plays behind me as a Centre Back so he’s constantly in my ear. Even when I make mistakes, he doesn’t shout at me. He pulls me aside during the game or training or water break to give me tips.”

“Marshall Munetsi also plays a big role because we are both young and play in the Defensive Midfield together. He motivates me because he is playing in big games and doing well. We’ve become good friends and he is my housemate. We talk about the game a lot and I think I watch him and Issa Sarr more than any other player. Munetsi is a good guy and he understands what is happening with me. He was in the same situation not too long ago.”

The feeling from the MDC guys

“They are very happy for me, I speak to them all the time because we are still very good friends. They were teasing me the other day, asking for autographs and pictures. But it’s all love. Tsebo Tsotetsi, Saketso Moremi and Fezile Gcaba are very supportive, I speak to them the most.”

“I was chatting to Moremi about his game vs Golden Arrows (in the MDC over the weekend). We encourage each other and I think it’s been the first time I’ve actually watched him play properly. In all our time playing together from Development and U17 all the way to the Promotion Division we were on the field at the same time. It’s very rare that we get to watch each other properly.”

“I’m glad that I am motivating him as well because he asks me all the time how things are in the senior team and what I’m learning there. There’s so much happening but I guess I can only tell him what is relevant to our position and hope that he can use some of that as well.”

The difference in the setup

“It’s a massive jump from what we did at the MDC. The intensity at training is very high and there is constantly something happening. Our day starts with a team breakfast and during that time we get the plan for the day. Wayne Sandilands also prays for us and we listen to something motivational. Then we break into smaller position meetings and then we train. Then there’s lunch and if needed, there’s more sessions in smaller groups after lunch. We do a lot of corrections from the previous matches and even the day’s training session. The coaches spend a lot of time on this.”

“I’m still learning and I think that something like this will make me a better player over time. At the MDC level we did similar things so it was great to see that we are not far off from the seniors. But the intensity here is much higher. You have to be very fit to keep up with the training sessions, and I can now appreciate and respect the hard work that the players have been putting in. You only realise when you go through it yourself.”

A message to the Bucs family

“I’m a humble person, very quiet, I respect everyone and I like to learn. The way I live my life is the same way that I play. I was always taught to love and respect the game because it will love and respect you back. That’s why I always try my best. If there is anything I can promise the Ghost, it’s that I will always give my best, not just for them, but for the Chairman and my family and my team and myself.”