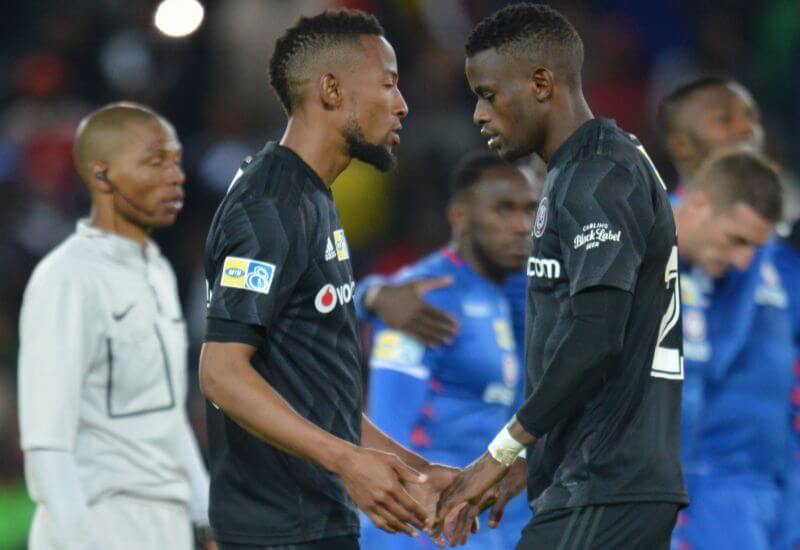 For the tenth consecutive match Orlando Pirates have failed to shake the SuperSport United monkey off their back when they lost 4-3 on penalties to Matsatsantsa in the Quarterfinals of the MTN8.

Despite dominating for the most part of the match, the Buccaneers will look back at their missed chances including a penalty miss by Augustine Mulenga in Extra-Time as they made a very brief return to the winner-takes-all competition for the first time since 2016.

The Buccaneers looked dangerous whenever they pushed forward in the early exchanges with Mulenga leading the attack. The hard-working forward - who joined Bucs from Zambian side Zanaco last January - tried his luck from range eight minutes into the game, however, his effort went wide of SuperSport goalkeeper Ronwen Williams' goal-posts as the Buccaneers looked to grab an early lead.

Pirates did open the scoring in the 14th minute through Mulenga, who combined with Linda Mntambo, before firing past Williams to make it 1-0.

United grew in confidence as the game progressed and they threatened through Teboho Mokoena in the 27th minute. The 21-year-old midfielder's powerful low shot beat Pirates keeper Siyabonga Mpontshane, but the ball shaved the upright and Bucs survived a scare.

Matsatsantsa kept pushing and they managed to restore parity through their inspirational captain Dean Furman in the 33rd minute. The South Africa international combined with Evans Rusike, before firing past Mpontshane with a curling effort to make it 1-1.

Pirates then pushed forward in numbers in the closing stages of the first half with the visitors looking to contain the hosts. Bucs marksman Justin Shonga's goal-bound effort was brilliantly blocked by Clayton Daniels eight minutes before the interval.

The score was 1-1 at half-time following an enthralling first-half.

Matsatsantsa were the better side in the opening stages of the second-half and they deservedly took the lead four minutes after the restart. Bradley Grobler set-up Rusike, who beat Mpontshane with a low shot from inside the box to make it 2-1 to SuperSport with the Bucs defence exposed.

The lead lasted only 11 minutes as the Buccaneers managed to restore parity through Gladwin Shitolo. The defender directed Pirates team-mate Xola Mlambo's effort into the back of the net - beating Williams hands down to bring the Bucs back into the game at 2-2.

United introduced English striker James Keene in the closing stages of the second half as the visitors looked to snatch a late winner. The last chance of the half fell for Vincent Pule in the 84th minute after Thamsanqa Gabuza's shot was parried into his path by Williams and the Pirates winger fired over the crossbar with the goalkeeper at his mercy.

The match ended in a 2-2 stalemate in regulation time and extra-time followed after another entertaining half.

The Buccaneers did most of the attacking and they were awarded a penalty in the second half of extra-time after Gabuza was fouled inside the SuperSport box by Morgan Gould. Unfortunately Mulenga failed to capitalise on the resultant penalty - ensuring that the game end in a 2-2 draw and a penalty shootout left to decide the winner.