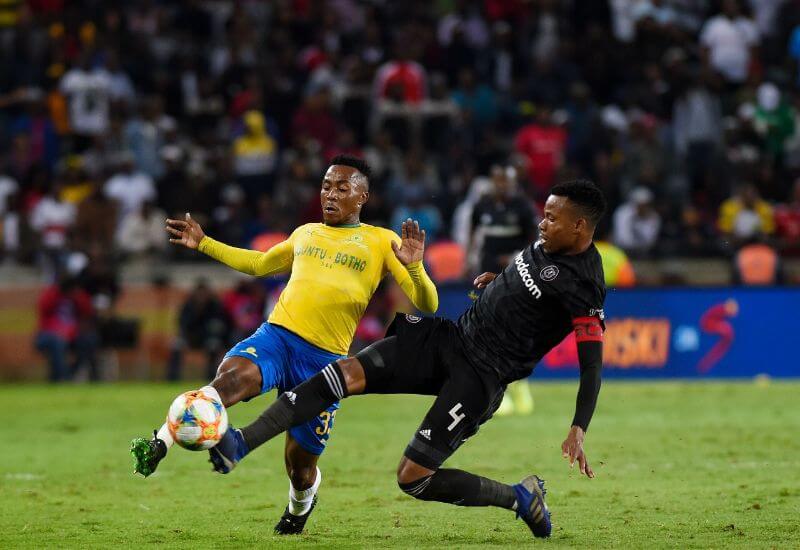 Orlando Pirates and Mamelodi Sundowns played out to an exciting goalless draw in an Absa Premiership encounter played at the Orlando Stadium on Monday night.

With this result the Buccaneers move up to second place, only three points behind the Brazilians.

If the first leg of this encounter was a tactical chess game, then tonight’s match was more of an attacking onslaught with both sides choosing to attack from the onset.

The visitors were first to threaten as early as the opening 30 seconds when Thapelo Morena put an effort just wide after meeting Tebogo Langerman’s low cross.

That signaled the start of an exciting first half in which the teams traded significant chances but were unable to find the back of the net.

The most significant action of the first half took place just after the half-hour mark when Luvoyo Memela threatened to run through the ‘Downs defence before being hacked down by Lebohang Maboe.

The Buccaneers wanted a red card brandished, but the referee opted only for a yellow.

The second half saw fewer chances created at either end, while Pirates suffered a blow on 67 minutes when they were forced to withdraw ‘keeper Sandilands – who suffered a blow to the head in an earlier collision – and replace him with Siyabonga Mpontshane.

The Buccaneers looked the likelier scorers by this stage and nearly claimed the lead with just under 15 minutes left to play, when Augustine Mulenga got in behind the Sundowns defence but was denied by a smothering save from Onyango.

The Brazilians nearly snatched a late goal when Happy Jele’s dangerous back pass almost allowed Lebohang Maboe in, but Mpontshane reacted well to get to the ball first and make a vital clearance.

With the game well into the referee’s optional time, Thembinkosi Lorch found himself with a half-chance in the box but fluffed his opportunity which allowed the Downs defence enough time to clear the danger.