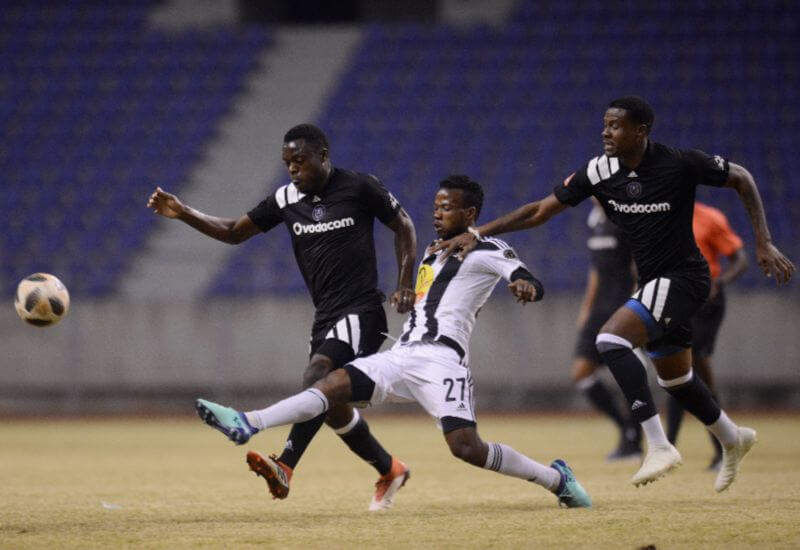 Orlando Pirates faced a stern test in their friendly match against a formidable foe, TP Mazembe on Thursday afternoon at the Levy Mwanawasa Stadium in Ndola.

In what can be categorised as preparation for both sides - the Buccaneers in pre-season, while the Congolese prepare for their upcoming CAF Champion’s League clash - the Soweto giants would be encouraged by proceedings while on tour.

The encounter had little in it that lived up to its billing as a friendly, with both set of players going at it from the onset in a high-paced and energetic fixture.

Played in three parts, with two 45 minute sessions and one 30 minute period - the only clear cut chance for the lead fell to Vincent Pule, who rattled the crossbar with his free kick in the first stanza.

Bucs’ Head Coach, Milutin Sredojevic, was impressed with the outcome of his sides first competitive fixture as he sat with Orlandopiratesfc.comshortly after the game.

“We played a total of 120 minutes of football against TP Mazembe, one of the best teams in Sub-Saharan Africa. Maybe the match came early for us but we are happy with the result because it has set the criteria and standards that we need to reach in order to compete in Africa.”

“This Mazembe team won the 2015 CAF Champions League title and won back-to-back CAF Confederations Cup titles in 2016 and 2017, and this is the standard we consistently needed to keep up with throughout the match.”

ON THE FIXTURE ITSELF

“It was a tough and competitive game because of the difference in the level of competitiveness between the two teams; we are from a break and in preparation for a new season, while they are competing regularly.”

“It was two-way traffic though, despite the levels, with both teams attacking each other like boxers. We believe that this experience has benefited our young players a lot, especially in helping them understand what it means to play in Africa and against strong opposition that plays in continental competition.”

ON THE POSITIVES OF THE RESULT

“We are practically finalising the third phase of our pre-season preparations and we will have three more weeks to fine tune the team both tactically and technically after this Zambian tour. We believe that we are on the right track.”

“The important thing is to continue getting more game time and we are slowly, gradually and progressively increasing the minutes of each player and once we reach the top competitive form, we believe that we shall succeed in giving our supporters positive results.”

ON THE TEAM’S OBJECTIVES

“Our preseason camp has helped us to set a strong foundation that will help us last in a very competitive season ahead. It’s too early to say we are at 100% but we are somewhere on the half way line after three weeks.”

“For us, it’s not important where we are at this stage because we are confident of where we are going. We now need to polish off our work and put the team in a position where the players are playing in accordance with our game model.”

“Once we succeed in getting the players to understand our game model then we will be more effective in front of goals, whilst remaining solid defensively.”

ON HOW THE NEW FACES ARE ACCLIMATISING

“We have new guys in Technical Team which have fitted in perfectly and it feels like they have been here for years. The players are also blending in well and gelling with the team because they know that they are part of a family both on and off the field.”

“Everyone understands that they are expected to always give a full contribution in order to add value to the already existing quality that we have in the team. We have acclimatised and adjusted them to our culture, tradition and the Orlando Pirates way of life. They are fully aware of the meaning behind the jersey and the expectation that entails as servants of the Bucs badge.”