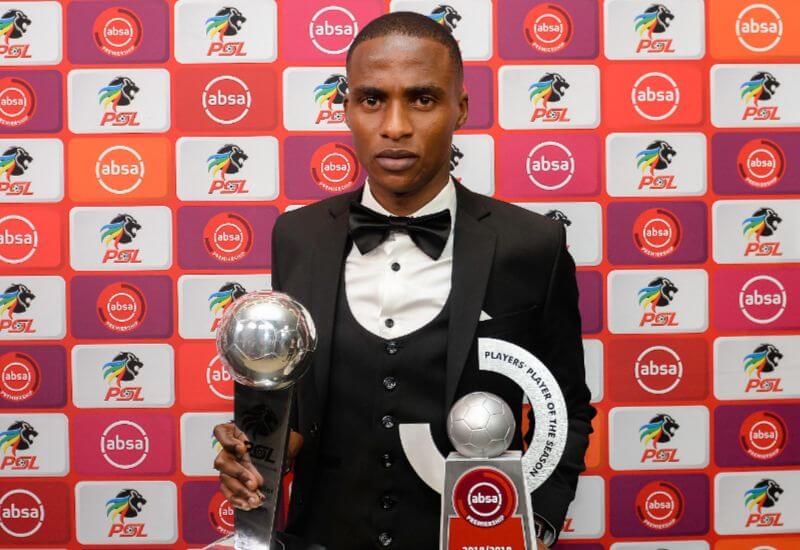 The often quiet and shy Thembinkosi Lorch isn’t one of those players that you will hear talking much. Even on an evening where he was knighted as the best player in the PSL at the glitzy awards function held in Durban on Sunday night, the 25-year old’s acceptance speech was short and concise.

Never one to hog the spotlight or to complain, Lorch has always been more about getting on with the business at hand and letting his feet do more of the talking. This is how it’s always been for the Ficksburg-born man throughout his career.

Orlandopiratesfc.com sat down with the PSL Footballer of the Season for a heart-to-heart where he was able to go deeper into expressing himself about his latest achievements.

When receiving the awards, Lorch revealed that emotions had got the better of him, but now he is able to open up about his true feelings; starting with the most important people in his heart, his parents.

“That night was a surreal experience for me, it felt like it was a dream,” he recalls. “I never thought that at this stage of my career I would be regarded as the best player in the league. It’s a real honour.”

“I have so many people that I need to thank for helping me reach this level, and I shared a few already, but I want to acknowledge my parents who have played a very crucial role in my life.”

Lorch reveals the important role his parents have played in his life, especially his father who gave him a heart-to-heart early in his Pirates career, and was also on hand to see him step up to the podium on his big night.

“When I signed for the Club back in 2015, I won’t lie I was very disappointed when I had to go out on loan soon afterwards,” Lorch revealed. “I went from total elation (by signing for Pirates) to sadness as soon as I heard that I would be going out on loan immediately.”

“At first I saw it as a kick in the teeth. After all I thought to myself, ‘why sign me if you want me to go on loan’. I was demoralised a bit but thankfully my father was there to speak sense into me. He was frank and honest. He said ‘my boy, you need to be special to play for Pirates. They already see something in you, now work to get that something special out of you.’”

Lorch went on to join Cape Town All Stars on loan and then later moved to Chippa United where he finally released that ‘special something’ his father was talking about. So bright was his talent that Pirates recalled him from his loan spell at the Chilli Boys in January of 2017 and as they say, the rest is history.

The attacking midfielder completed that half of the 2017 season with a return of 11 matches - three goals, including one assist, and then 24 games (four goals and five assists) a season later.

I thought I was Jinxed

But it wasn’t all plain sailing for Lorch. Looking back at those two seasons, he reflects on a moment in time where he felt he was jinxed, so much so that he believed the same bad omen would befall him during this 2018/19 campaign.

“You know now that it’s behind me I am able to talk about it more freely but there was a time when I thought I had bad luck or something. How do you explain what happened to me?”, he asked with a perplexed look on his face.

If you might be wondering what the star man was referring to, Lorch suffered a shoulder injury on 15 April 2017 in a league match against Highlands Park. Fast forward exactly 365 days later to 15 April 2018, he succumbed to the same injury in a different match.

April 13 of this season, just two days shy of a treble of coincidental dates, Orlando Pirates hosted Free State Stars at Orlando Stadium with Lorch in the starting line-up.

“I’d be lying if I said that the thought didn’t cross my mind in that game against Free State Stars. But do you blame me? How does someone suffer the same injury on the exact same day, one year apart?

“I played very tentatively in that match and if I recall I was even substituted and after the game came to the end, I was very relieved. I can look back now and laugh at it but it was mentally taxing on me.”

The Free State-born player has made significant progress this past season. This campaign has seen him record a career-best 40 matches in all competitions; raking up an impressive tally of 15 goals and five assists.

“This has been the best season of my career by far. All the hard work that I put in this season has paid off, it’s just a pity that as a team we didn’t win any silverware.”

“I also would like to use this opportunity now to thank some people who I omitted last night in my acceptance speech. I was very emotional and almost cried but one day later with everything having sunk in, I would like to once again thank my parents – thank you for everything you have done for me and what you continue to do. I owe all that I have to you. I could not have done this without you and for that reason this is much your award as it is mine.”

“A big thanks also to the entire Pirates technical team for all they have done for me this season and for always pushing me to do more. The pursuit for excellence is what forces us to reflect and also want to better ourselves as players.”

“And finally, to my teammates and all the players that I competed with this year. I would like to extend my gratitude to you all and thank you for voting for me. There is no better recognition than that of your own peers and for that I will forever cherish this award. Thank you Magents, it has been an exciting season; let’s do it all again next season,” he concluded.