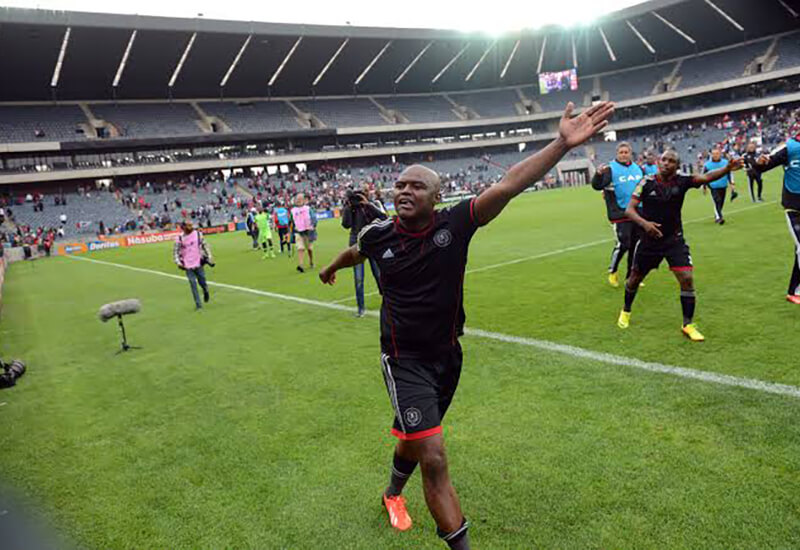 Thulasizwe Mbuyane was one the more successful forwards to have donned the Orlando Pirates jersey when it came to fixtures against Mamelodi Sundowns. During his spell with the Mighty Buccaneers, the man affectionately known as “Juju” was the regular scourge of the club which came from his native Mamelodi township where he grew up and lived.

Through his goalscoring exploits, Mbuyane would send The Ghost into raptures as he banged in crucial goals at leisure, followed by the sheer joy of the Jujuman Dance where he conducted the crowds into waves of celebration as his tongue wagged from side to side to cue the mass euphoria in the stands.

Mbuyane was an ever-present feature as the Bucs romped to an historic treble in the 2011/2012 season, and the enigmatic marksman caught up with Orlandopiratesfc.com to share his thoughts on a fixture that is fast becoming a classic given its recent rise in prolificacy in the football calendar.

The rivalry between Orlando Pirates and Mamelodi Sundowns

“All sports are defined by their big rivalries and in South Africa, the football rivalry is defined by the Soweto Derby but I think since Sundowns’ emergence over the years as one of the biggest clubs in the country it was only natural that a strong rivalry would develop between these two sides. I think that is because Orlando Pirates has paved the way to success and Sundowns has always been desperate to emulate and possibly try to surpass it.”

“The rivalry however is intensified now that Sundowns has won a continental title where Pirates were the only team locally that held it for a long time. The race to see who will get the second star first makes things exciting and the fact that this coming game could potentially decide where the league title is going means that everyone is up for it.”

“It’s even in the stands before kickoff where you see that the rivalry is passionate and sometimes intense. With this being our home game, we need to have that stadium full to capacity. I know from personal experience that players often channel the positive energy from the stands and you already start winning the game mentally which drives you to excel on the field.”

What made you so prolific against Sundowns?

“Throughout my career with Pirates we always had the upper hand against Sundowns. There was always that self-confidence and belief that they would not come out on top, and that was the drive that helped me to get into positions where I could help the team over the line or even score regularly against them when I got the chance.”

“Coming from Mamelodi also meant that if I went home after Pirates had lost or drawn another game, there would be constant reminders about those results. So when it came to Sundowns and I would be part of the victory for Pirates over them, I would be the reminder of what had just happened. It was all in the good nature of football because despite the areas where we live, we support and play for rival teams.”

“When I was at the Bucs, we had a good team that supported each other and had an attitude of fighting until the end. We were not as talented overall as the current squad but we believed in ourselves and each other. It was that attitude of team spirit, hard work, and having each other’s back that helped us to be dominant against Sundowns and it will be the same thing that keeps us there.”