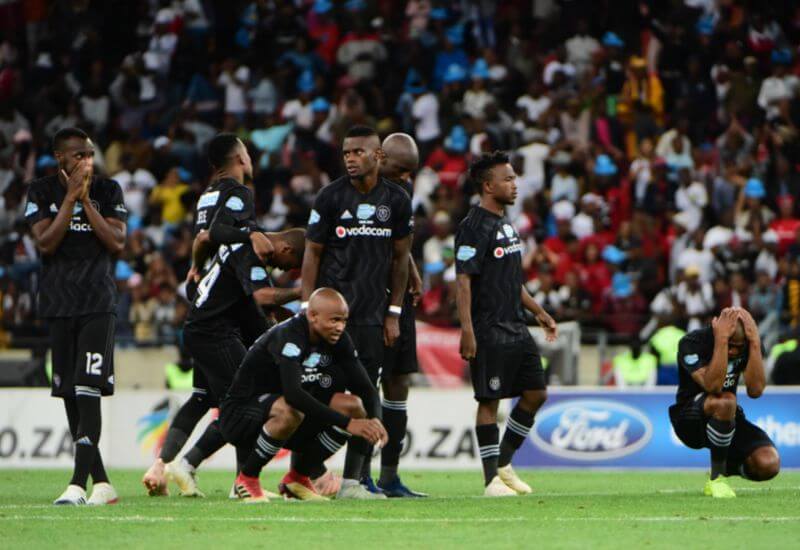 Orlando Pirates fell at the final hurdle as they were defeated 3-2 on penalties by Baroka FC in Port Elizabeth on Saturday evening.

Pirates have now lost eight times in the final of the league cup following the defeat to Bakgaga who claim their maiden title.

This was a match in which the Buccaneers never took the lead. Even when Siyabonga Mphontshane saved the second penalty from Baroka in the shootout, Zambian Justin Shonga failed to capitalise and give the Bucs a psychological lead as he ballooned his shot to Row Z of the Nelson Mandela Bay Stadium.

The defeat to Baroka will be a bitter pill to swallow for an otherwise gallant performance from the Soweto Giants, who played with 10-men for the major part of the match after defender Marshall Munetsi was red carded in the first half for a careless and unnecessary tackle.

Baroka took the lead on the stroke of half time through the boot of Jemondre Dickens who capitalised on a calamitous mistake by Mphontshane.

The second half continued much in the same way the first panned out, with Pirates dominating most of the possession. However Bakgaga were resolute at the back and allowed little to come through them, but when the 3-man Bucs attack did break through, goalkeeper Elvis Chipezeze was on hand to bail out his defence.

The Baroka keeper was indeed the man that stood between Pirates clinching only their second Telkom Knockout title in the history of the competition.

However the Soweto giants deservedly levelled matters from a well-taken freekick 12 minutes into the second half. Shonga hit the upright with his setpiece delivery and Nyatama reacted quickest and fired home from close range to make it 1-1, much to the delight of the Pirates fans.

Pirates continued to attack in the closing stages of the game, but Chipezeze made two great saves to deny Pule and Shonga. Chipezeze's late saves ensured that the game ended in a 1-1 draw in regulation time and extra-time followed.

Baroka were awarded a penalty in the first half of extra time after Onkabetse Makgantai was fouled inside the box Mpontshane. Mduduzi Mdantsane then stepped up and the Baroka captain beat Mpontshane from the spot to make it 2-1 to his side.

Pirates never lost hope as they pushed for the equalising goal and they managed to score in the second half of extra time.

Lorch netted with a header to make it 2-2 after some great work by Shonga and the goal ensured that the game ended in a draw ahead of the penalty shootout.

Baroka emerged 3-2 winners on penalties with Pirates attackers Lorch, Shonga and Thabiso Kutumela all failing to score from 12 yards.