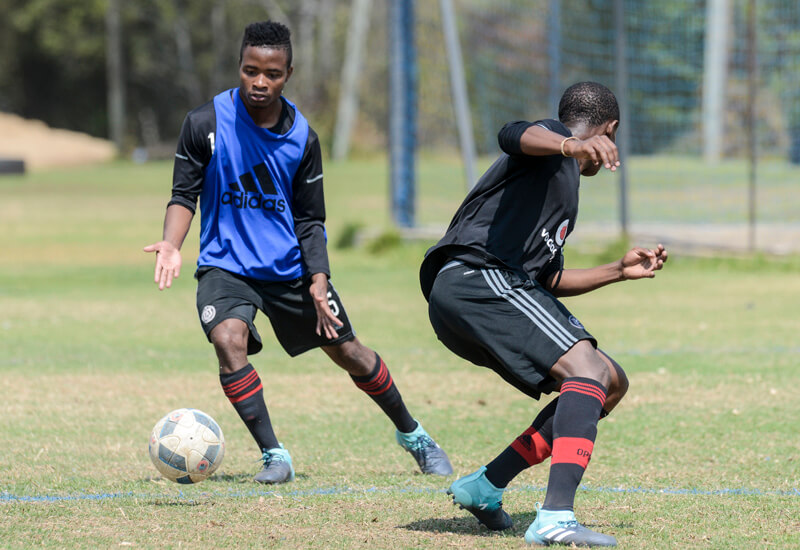 The Orlando Pirates u23s made it two wins out of two when they defeated Inqaba Football Club 5-2 in a SAB league match played at Randburg grounds on Sunday.

Fezile Gcaba, Freddie Hlalele, Thobela Sikhakhane, Thandolwethu Maqhina and Darnell Job were all on the scoresheet.

Following their 2-1 win over Gauteng in the opening week of the SAB league, Pirates players came into this encounter looking to make it two wins on the trot when they played host to Inqaba Football Club.

The men in black and white were further buoyed by their performance of the team a day before in the Multichoice Diski Challenge, where they defeated Amazulu 2-1.

The likes of Freddie Hlalele, Reanetse Ramatlapeng, Saketso Moremi and Katleho Molaba who played in the MDC match against Usuthu, featured in the starting line up on Sunday alongside some of the under 19 regulars – Gcaba and Siphumelele Mbulu.

Pirates dominated proceedings throughout the first half and it was no surprise when they took the lead in the 20th minute off the head of Gcaba who outjumped everyone in the box to connect with a pin point cross from a corner kick.

The second goal came through ten minutes later, this time from a counter attack which was finished off by Hlalele to score his third goal in two SAB matches.

Half time came through with the hosts leading 2-0.

The second half of the match continued much in the same way as the first half, with Pirates dictating play. However, the first real chance of the second stanza would be handed – literally, to Inqaba after the referee had adjudged a Pirates player to have handled the ball in the box.

The penalty was converted as Inqaba pulled one back to make for an interesting last 35 minutes of the match. Sensing that some of the players were beginning to tire, the Bucs bench opted to bring on the exciting Maqhina and Moses Mokwena.

The introduction of the duo sparked some much needed energy in the team and it took only five minutes for the hosts to restore their two goal lead after the referee pointed to the spot following a late tackle on ‘Mini Cooper’ Maqhina. Striker Sikhakhane stepped up and slotted into the bottom left corner.

Inqaba pulled one back in the 65th minute after a well-played cross on the right was met by the Inqaba striker who headed passed the keeper.

Ten minutes later, the ref once again pointed to the penalty spot after Moremi was fouled in the box. However, this time it would be Maqhina who would take the penalty. He chose the bottom right corner and although the keeper went in the same direction, there was too much power in the shot for him to save it.

Another penalty was awarded 15 minutes later to Inqaba - this time the striker blasted wide.

The final nail in the coffin for the visitors came in the 88th minute when the keeper failed to save Job’s cross-come-shot which squeezed into the keepers near post.

Next Match
Next up for Orlando Pirates is match against rivals Kaizer Chiefs.