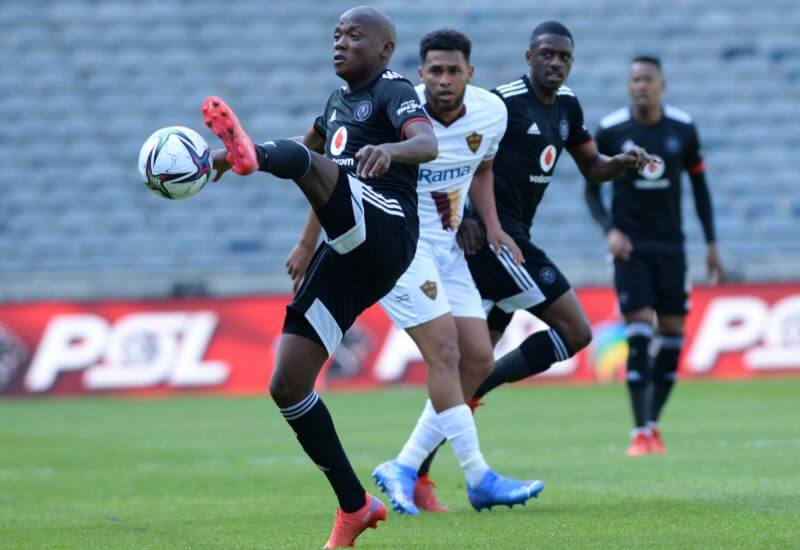 Orlando Pirates put on a brave effort to secure a point after being reduced to ten men in a 2-2 draw at home to Stellenbosch FC in the DStv Premiership season-opener at Orlando Stadium on Saturday.

After a succession of draws in the fixture in the previous season, the Buccaneers were looking to get off to a good start in what is set to be another gruelling campaign.

What was an eventful first half served up its first piece of drama as early as the second minute when Stellies striker Waseem Isaacs opened the scoring with a long-range strike, which caught an unfortunate deflection off Thulani Hlatshwayo before finding the back of the net.

Chasing the game, the Buccaneers were unable to combine in the final third.

This was until the 17th minute when Tebogo Tlolane won a free-kick just paces away from the penalty area after making a superb run down the middle.

The set-piece duties were entrusted to Deon Hotto, and the midfielder did not disappoint with an expertly-taken free kick which left keeper, Lee Langeveldt with no chance, drawing Pirates level.

Kabelo Dlamini got close on the half-hour mark, but the next decisive moment in the contest would come just four minutes from the break when Ntsikelelo Nyauza was sent packing for a harsh challenge on Ashley du Preez.

The drama was not confined to the first half, as just four minutes after the break, Bucs debutant Goodman Mosele marked his arrival with a bullet header, finding the target from the back post to send his side into the lead.

The visitors were however not to be outdone, using their one-man advantage to good effect in equalising just six minutes later through second-half substitute Judas Moseamedi.

Clear opportunities at goal were scarce in the closing half-hour, despite Pirates’ best efforts at surging forward.

Brought on just after the hour mark, Terrence Dzvukamanja found a way through the Stellies defence with his long-range shot, but didn’t put enough behind it to trouble Langeveldt.

It was a similar story for Vincent Pule, just six minutes from full-time, when he teed off from a long way out, only to send his shot wide.

There was nothing to celebrate from either camp towards the death, with the two sides playing to a third successive league draw.