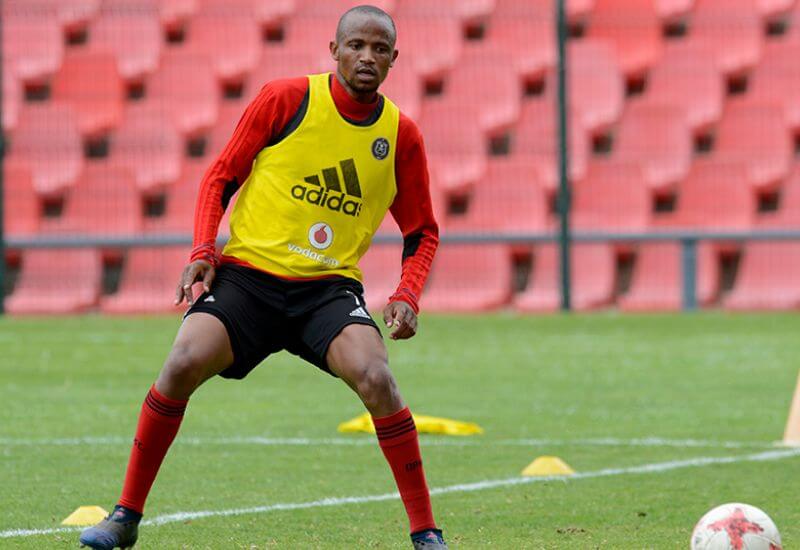 With just two days to go until the close of the January transfer window, Orlando Pirates announced the arrival of Xola Mlambo to the Club yesterday. The midfielder joins the Buccaneers at a crucial time with 19 matches played and only 11 to go as the Club enters its final stretch of the Absa Premiership race.

We caught up with Xola who had a few interesting things to say about his first day of training and the experience of coming aboard the Bucs ship.

How was your first day of training?

Today was a great day. Joining a big club like Orlando Pirates and having my first training session with them was great. I met with the coaches and they gave me a warm welcome along with my team-mates. The session was interesting and I learnt different things to what I’m used to but it was a great experience.

What stood out about your first day?

The whole day was interesting for me, I found a different vibe and atmosphere and found a bunch of really happy people. I was welcomed warmly by everybody. The words of encouragement from the players, coaches, the kit guys, and security was a very positive thing for me. I have never felt so welcomed at a new place, I honestly feel at home.

There are a few faces in the team that I go back a long way with because of our collective past experiences. Mpho Makola is special, he is more of a brother than a team-mate for me. When things were bad and I didn’t train for three weeks because I was stopped from training with Wits, he was there for me in what was an extremely frustrating time for me. We chatted all the time and he always advised me and kept me believing that I am a quality player and that things will work out.

Coach Rhulani was instrumental in keeping me motivated and ensuring that I continue to train hard during those three weeks when I was on my own. We go way back, even before I turned professional. I started working with him before I left the reserve team of Mamelodi Sundowns to join Cape Town All Stars.

It was also great to reunite with some of the players I have worked with in the past like Phetso Maphanga, we were together at the Sundowns junior ranks and at Cape Town All Stars. Diamond Thopola was my team-mate at Chippa United and Thembinkosi Lorch was my team mate at Cape Town All Stars as well. It was great to see all the familiar faces because it made things easier for me from the word go. I feel like I’m part of the team as opposed to being fearful or isolated in a new environment.

What does coming to Pirates mean for you?

It’s a great honour to sign a contract with a team of this magnitude. This is not just a small team, it is a huge team that comes with a lot of pressure. When we went to play in CAF with Wits, most people were familiar with the Orlando Pirates badge, South Africa is synonymous with Orlando Pirates in Africa. Therefore, becoming an Orlando Pirates player is really overwhelming and it’s an honour for me to part of the Bucs family.

What do you hope to achieve with the Club?

I would really like to see the team do well. I would like to learn from Orlando Pirates as a club with such a huge history. I’m sure I can only grow here and I would like to contribute positively to the history of the Club as well. I would love to see Pirates winning trophies while I’m around because it has been a while since the Club won silverware. I would like to be part of the crop of players that brings positive change to the Club.

Do you have any message for the Ghost?

It’s an honour to be part of the family and I’m happy for the warm welcome they have given me. Even before the deal was finalised I could see on social media that they wanted me here through their responses. I know the guys are doing well but I’m willing to add value on top of what has already been done. I am glad that I’m finally here and I want to learn a lot from the team and from the supporters about the culture of the Club and hopefully I can put a smile on the supporters’ faces and make them happy people again.