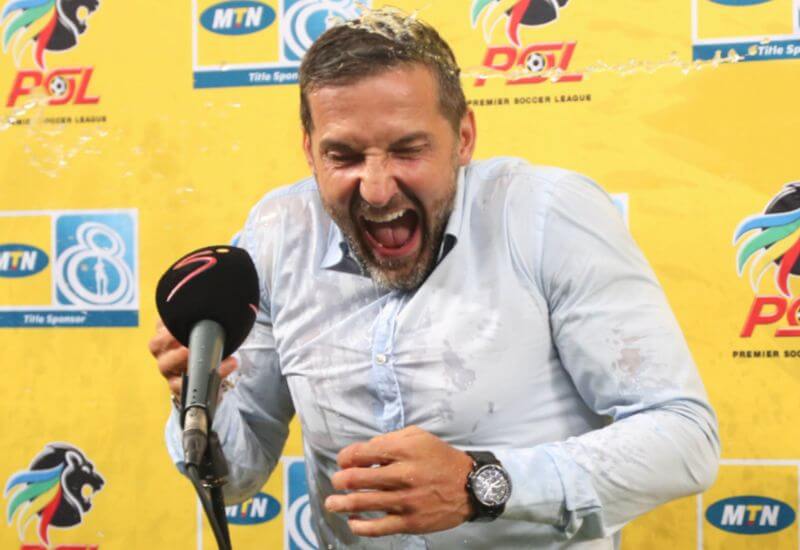 Josef Zinnbauer arrived in South Africa late last year amid a cloud of doubt as he took over the reins at Orlando Pirates. The announcement of the German mentor was met with its fair share of criticism with many questioning his appointment.

Few considered the 50-year-old the right man to end a run of more than six trophyless years for the Mighty Buccaneers. With many citing his conspicuous lack of silverware in his resume.

However, instead of dwelling on the negatives, Zinnbauer chose the somewhat painstakingly high road and let his football do the talking.

As fate would have it, when Orlando Pirates faced Bloemfontein Celtic in the final of the MTN8 this past weekend, it marked exactly a year and two days since Zinnbauer’s arrival at the Club….and what a way to cap off a year in office as he did on Saturday with a cup win for the Club.

Orlandopiratesfc.com sat with the Head Coach shortly after the match to reflect on his recent achievement.

Coach, congratulations on winning the MTN8! How does it feel to win your first title?

JZ: It is a good feeling for me but I’m particularly happy for the boys who did the job tonight and also for the supporters who have been behind this club through thick and thin. They deserve this title more than anybody.

When you joined the Club, you took over a team that was in 8th place, trailing the log leaders by 17 points. Fast forward to today – you finished third and you now have a cup under your belt. Did you think you would be here (with a cup in hand) after just 12 months?

JZ: Well, one doesn’t have a crystal ball which shows the future however, any coach who joins a big club, a club with a history and pedigree such as Orlando Pirates, should know what he is getting himself into and what is expected of him.

However, having said that I joined during a difficult period at the club. It was not easy taking over a team in mid-season and a group of players who had already experienced two different coaches in that year. It was not an ideal scenario but management has been supportive from day one, we worked hard and thankfully we started to turn things around. It hasn’t been perfect, but I think under the circumstances we did well to steer the Pirates ship back in the right direction.

As for expecting to win the cup? It’s an amazing feeling of course to win but like I said earlier, a team like Pirates expects success and this means that we don’t stop now. We need to continue working and not relax after winning the MTN8.

What does this success mean to you personally?

JZ: For me this is very special. I remember in the first two weeks in the club I was bombarded with the same questions about not winning any title and how I expected to end the club’s barren spell without having won anything. Obviously, such comments do sting but I am someone who is motivated by such things and I’m obviously thankful at the end of it all that I’ve been able to lead the team to this MTN8 win. But again, this isn’t about me, it's about the team and what we need to achieve as a collective.

Finally, Coach, the introduction of Thembinkosi Lorch proved to be a masterstroke from you. What made you decide to bring him in?

JZ: I’ll be honest, this was not a one-man decision. When we had the injury to (Thabang) Monare, we had to decide quickly who to bring on. I had a discussion with my assistant Fadlu (Davids) and we agreed to bring on Lorch. But because he was coming back from an injury, we knew that we could only play him for 60-70 minutes. We took the risk and it paid off. Lorch did an amazing job and capped off that performance with a match winning goal.

Thank you for your time Coach. Anything you would like to add?

JZ: I’d like to thank the supporters. This was for them. May they continue backing the players like they have been doing. As for us (technical team and players), the honeymoon is over. We get back to working on Monday. We have an important match against Chippa United coming up as well as the CAF Confederations Cup match over the weekend. There is no time to relax.