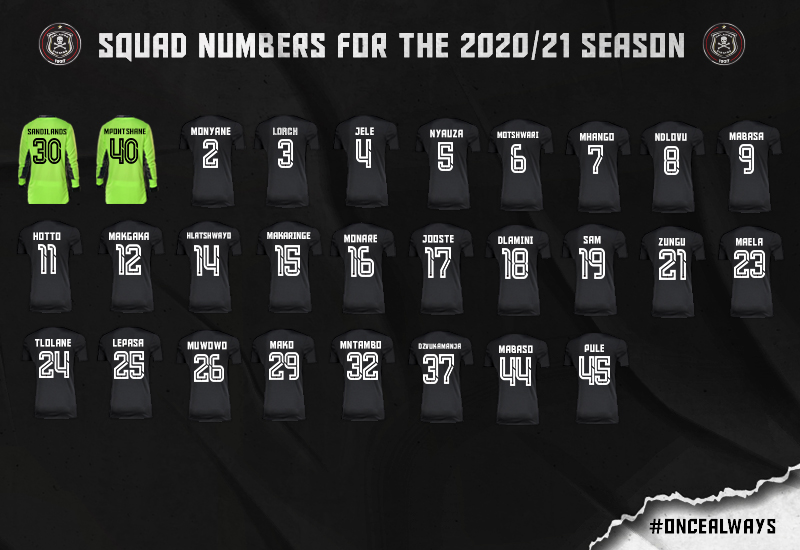 We are pleased to confirm the official jersey numbers for the 2020/21 Premier Soccer League season.

With a new season kicking off tomorrow and the Club having gone through several changes in the offseason, jersey numbers have been updated.

Some numbers have been freed up following the exits, resulting in many of the new Buccaneers grabbing the available digits, while some of the older squad members will be rocking new numbers on their back.

New arrival Thulani Hlatshwayo takes up the previously vacant number 14 jersey, which was famously worn by former legendary captain Lucky Lekgwathi from 2002 to 2014, while Deon Hotto will sport the familiar number 11, which he wore at his previous club.

As for the other new arrivals, Wayde Jooste will rock number 17 and Collins Makgaka number 12. Terrence Dzvukamanja takes number 37, while the club's latest signing Thabang Monare is our new number 16.

Thabiso Monyane, who made his first team debut last season with 35 on his back has moved to the single digits, and will wear number 2 in the new campaign.

Players who have been playing in the clubs’ development teams such as Fezile Gcaba, Thabiso Sesane, Azola Tshobeni, Tshepo Mofokeng and Kopano Thuntsane, will be assigned official numbers upon registration.